The Grand Comics Database (GCD) is a nonprofit, internet-based organization of international volunteers dedicated to building an open database covering all printed comics throughout the world. Give our search a try, take a look at the menu to the left to see how you can help us improve the site, or use my.comics.org to track and manage your comic collection.

The Grand Comics Database is sad to announce the passing of longtime contributor Lou Mougin.

Lou Mougin (1954-2022) Prolific indexer for the GCD, he got his start working on indexes sold by Marvel and DC, as well as numerous articles on gold and silver age comics. He continued to index comics for the GCD while he wrote comics professionally.

He contributed to thousands of issues at the GCD, 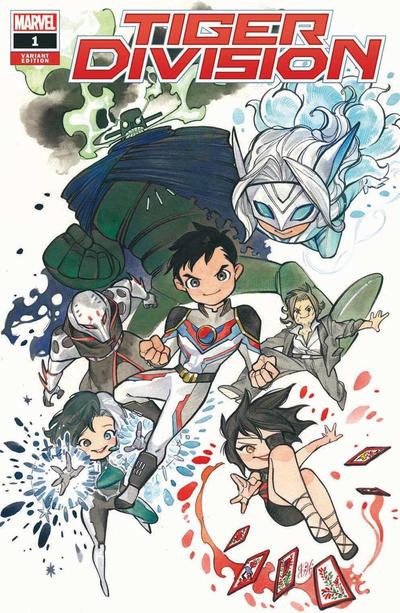 We reached 1,111,111 comic covers. The milestone issue was the Peach Momoko Chibi Variant from the just published Tiger Division #1 from Marvel.

Each week, a small number of GCD volunteers add listings to our database for the new comics released that week in North America. These are just the basic listings, not full indexes. This makes it easier for other volunteers who upload covers and for indexers, as well as for people using my.comics.org.

Each volunteer covers one publisher or a small group of publishers ("D publishers except DC", for example). From public sources such as ComicsList and Diamond Previews online, they add the issues and make note of the prices and a few other details. We are looking for additional volunteers for this weekly task.

Follow this link for a description of the process and a list of which publishers are currently covered.

1982 February 8
Manuel "Manix" Abrera is a Filipino freelance cartoonist, artist, author, and musician. He is well-known as the creator of "Kikomachine Komix", his long-running daily strip in the Philippine Daily Inquirer. His weekly webcomic "News Hardcore!" runs on GMA News Online, a major Filipino news site.

He has produced 16 volumes of "Kikomachine Komix" and a "News Hardcore!" compilation, as well as two wordless graphic novels entitled "12" and "14".

He is the son of cartoonist Jess Abrera and author and academic Maria Bernadette (Dette) Lorenzo Abrera.

1914 February 8 - 1974 January 18
Milton Finger, known professionally as Bill Finger was an American comic strip and comic book writer best known as the co-creator, with Bob Kane, of the DC Comics character Batman, and the co-architect of the series' development. Although Finger did not receive contemporaneous credit for his hand in the development of Batman, Kane acknowledged Finger's contributions years after Finger's death. He also co-created The Joker.

He was posthumously inducted into the comic book industry's Jack Kirby Hall of Fame in 1994 and the Will Eisner Comic Book Hall of Fame in 1999. The Bill Finger Award, founded by Jerry Robinson and presented annually at the San Diego Comic-Con to honor excellence in comic-book writing, is named for him.

Alex Blum won three art prizes at age of 13 in contests run by Cincinnati newspapers, circa 1902. At some point he taught at the Boston Art School. In the late 1910s, Blum worked as a newspaper illustrator for an unknown Philadelphia newspaper.

Blum was an artist doing advertising work during the 1920s, details unknown currently.

He worked as an etcher and painter in the fine arts with works exhibited at the Library of Congress and Yale University.

Honors received included: Etching Class—First prize, A.H. Baldwin Fund from the National Academy of Design in 1909; and the Philadelphia Alliance Bronze Medal for Etching in 1920.

1812 February 7 - 1870 June 9
Charles Dickens was an English writer and social critic. He created some of the world's best-known fictional characters and is regarded by many as the greatest novelist of the Victorian era. His works enjoyed unprecedented popularity during his lifetime, and by the 20th century critics and scholars had recognised him as a literary genius. His novels and short stories are still widely read today.

Udall wrote comic and text stories during this time period, usually under one of the numerous aliases, and was credited by his Udall name by 1948. His last regular comic book work was known to be in 1950, though other work he did would be printed a few times thereafter into the 1960s.

There are several ways in which you can help us to improve our site and its content.

Disclaimer
The Grand Comics Database Project (GCD) is a volunteer project with the goal of documenting and indexing all comics for the free use of scholars, historians, researchers, and fans.
The GCD acknowledges that the all-encompassing research nature of the project may result in the posting of cover scans for comics with images that some may find objectionable.
Viewer discretion is advised.
The Grand Comics Database Team

How to Help | Tutorial
Documentation Wiki