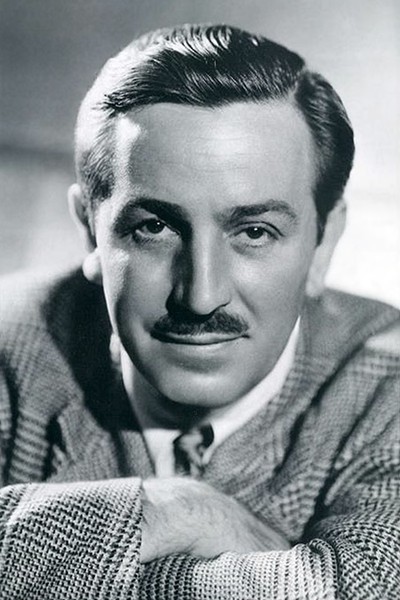 Biography: Walter Elias Disney was a pioneering American animator, voice actor, and businessman. Disney grew up in the Chicago area where he studied art. He began a career as a commercial illustrator at 18, and in his early 20s moved to California with his brother Roy, where he established an animation studio, the Disney Brothers Studio. With Ub Iwerks, he developed the character of Mickey Mouse, whom he initially voiced as well. The success of the Mickey Mouse and Silly Symphony shorts led to continued growth of the studio, which over time expanded into feature films and theme parks.

Disney was also a highly skilled business person. A large part of the Disney empire was built from successfully merchandising the Disney characters, in toys, books, comics, and more. With Iwerks, Disney began a daily Mickey Mouse comic strip for King Features (though the strip was quickly passed off to Floyd Gottfredson). This was followed by Silly Symphony and Donald Duck strips. Disney characters were also licensed for comic books; Dell & Western produced DIsney comics in the US from the 1930s through the 1970s; after which other publishers took up the license. New material was also produced in foreign markets, appearing in Italian, Spanish, British, French, Scandinavian, Dutch, and Latin American publications, and reprinted world wide.

Disney himself was not directly involved with any of the comics following the initial development of the Mickey strip in the '30s; he was mainly concerned with overseeing his continually expanding empire. He was directly involved with most of the feature films produced by his studio during his lifetime; with the development of the studio's television programs in the '50s; and with the development of his theme parks, Disneyland and Disneyworld. He died of cancer in December 1966 before Disneyworld had been completed.