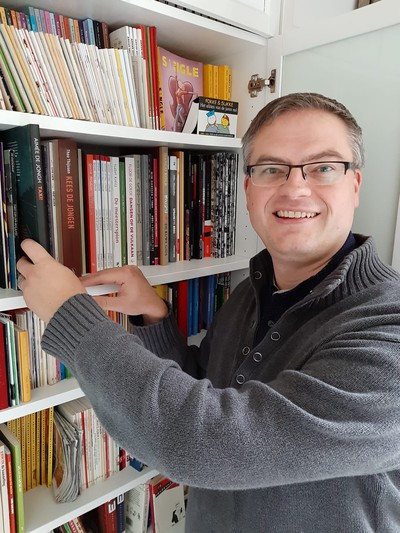 Biography: A native of Rotterdam, Schenk became involved with the Dutch comic book community at an early age. At age 15, he was the second editor of fan magazine 'Comic View' (1992-1994), and shortly after was instrumental in starting a new fanzine called 'Universal Comics Magazine' (1994-1999). On his own, he started the fanzine 'Comic Collector' (2000-2001) and a catalogue of all US comics published in Dutch. In the years after that, he published various articles on comics for numerous print and online publications.
In 2009 he was involved with starting Windmill Comics Publishing, which has since become the largest publisher of fan publications in The Netherlands. He edits most titles of the company's line.
In September 2019, he was elected a board member of Het Stripschap, the world's oldest comic book fan organisation. He also became editor to Het Stripschap's publication, StripNieuws.
As a writer, he has (co-)created numerous characters, such as Copperhead Kid and Nicky Tesla (with Rik van Niedek), Viking Cowboy (with Waldo Van Gheluwe), as well as reviving the Golden Age character Daredevil as 'Durfal' (with penciller van Niedek and inker Gerard van de Werken). He has also written numerous stories for anthologies, published in The Netherlands, Belgium, Germany and the United States.