Biography: Gene Ahern was a cartoonist best known for his bombastic Major Hoople, a pompous character who appeared in the long-run syndicated gag panel Our Boarding House. Many of Ahern's comic strips took a surreal or screwball approach, notably The Squirrel Cage with its nonsensical catchphrase "Nov shmoz ka pop?"

In 1914, after three years study at the Chicago Art Institute, Ahern went to Cleveland and worked for the Newspaper Enterprise Association (NEA) syndicate as a sportswriter and artist, initially inking comic drawings for $18 a week. He worked on such strips as Dream Dope, Fathead Fritz, Sporty Sid and his Pals, Taking Her to the Ball Game, Ain't Nature Wonderful, Squirrel Food, Balmy Benny and Otto Auto, about a man who loved driving so much that he couldn't stop.
In 1921 he introduced the Nut Brothers, Ches and Wal, in Crazy Quilt. Our Boarding House began September 16, 1921, scoring a huge success with readers after the January 1922 arrival of Major Hoople.The Nut Bros: Ches and Wal ran as a topper strip above Our Boarding House.

Ahern was making an annual $35,000 at NEA, and King Features Syndicate offered to double that figure. Leaving NEA in March 1936 for King Features, Ahern created Room and Board (1936–1953). A resident in that boarding house was Judge Puffle, very much in the Hoople tradition. 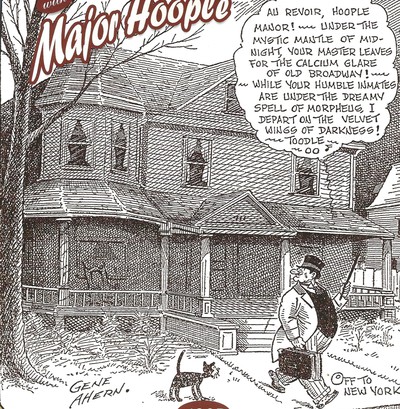