Biography: Mager was the son of German immigrants, and comics sent to his parents by their European relatives prompted his interest in cartooning. He began drawing sports cartoons which he sold to newspapers. By the age of 20, he already had a following when he expanded his repertoire to include clownish animals, and his cartoons soon appeared daily as In Jungle Land, or occasionally, In Jungle Society.

In 1904, he created the first of his successful Monk comic strips featuring monkey-like characters. Knocko the Monk was soon followed by new figures such as Rhymo the Monk, Mufti the Monk, Freshy the Monk, Henpecko the Monk, Groucho the Monk and the most popular, Sherlocko the Monk.

In 1913, Mager humanized Sherlocko into his Hawkshaw the Detective strip, which appeared in The New York World. During the 1920s, Mager worked as an assistant on Rudolph Dirks' Captain and the Kids. Other comics by Mager included And Then Papa Came (1904), Main Street, Oliver's Adventures (1926), Obliging Otto (1913) and Millionbucks (1913). Mager continued Sherlocko and Hawkshaw until his retirement in the late 1940s.

Mager's paintings are in many collections, including the Whitney Museum and the Newark Museum of Art. He was widely exhibited during his lifetime, showing at the Whitney, the Corcoran Gallery of Art and the Pennsylvania Academy of Fine Arts. He was a member of the Salon of Independent Artists and the Salons of America.

Mager died of a heart attack. 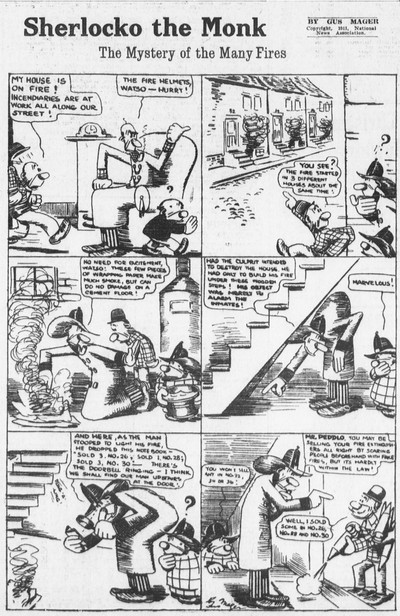