Relocating to New York, he was at the New York Herald when he drew his first nationally syndicated strip, Snapshot Bill (1914), followed by Ginger Pop, Fat Chance, Looie and His Tin Lizzie and The Demon Demonstrator. He also worked as an illustrator for Life and Judge (1918–21).

Westover worked on his concept of a flapper character in a strip he titled Rose of the Office. With a title change to Tillie the Toiler, it sold to King Features Syndicate. Leaving the Herald, he began Tillie the Toiler for King Features in 1921, and the working-girl strip quickly established a wide readership, leading to a 1927 film adaptation by Hearst's Cosmopolitan Pictures with Marion Davies as Tillie.

During the late 1920s, more than 600 papers were carrying Tillie The Toiler. In 1926, he added another strip, The Van Swaggers, to his Sunday page as a topper. Cupples & Leon published a series of at least eight Tillie the Toiler reprint collections beginning in the 1920s and continuing into the 1930s. Westover profited from another movie when Kay Harris appeared in the title role of Columbia Pictures' Tillie the Toiler in 1941.

When Westover retired in the early 1950s, Bob Gustafson continued Tillie the Toiler until 1959. 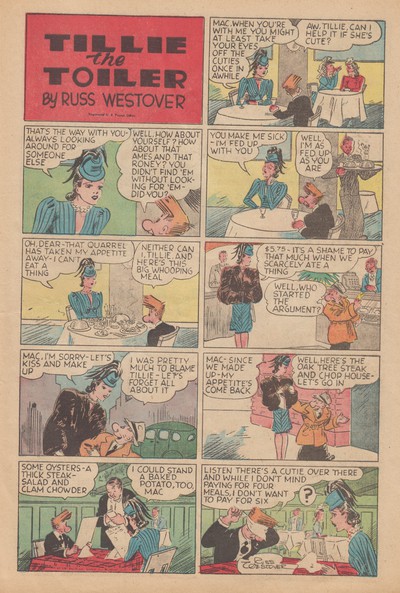