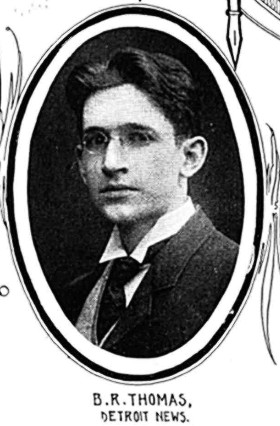 Thomas worked as a newspaper artist for the Cleveland Press (Cleveland, Ohio), from 1900 to 1902. He then worked doing advertising illustrations for unknown products for an unknown agency, from 1902 to 1904. In 1904, Thomas joined the Detroit News (Detroit, Michigan) as a cartoonist. Per Lambiek, he started doing political cartoons in 1912 for the Detroit News, continuing there until 1951.

For an unknown time period, Thomas' political cartoonists were syndicated through the North American Newspaper Alliance. He also worked in an unknown capacity for the Bell Syndicate and the Thompson Feature Service. His cartoon work appeared in Judge (Judge, 1881 series) and Life (Life Publishing Company, 1883 Series) magazines.

Locally in Detroit, Thomas is most famous for his December 10, 1914 cartoon "The Boy He Used to Be" depicting a well-to-do man, arms full with gifts, holding the hands with his newspaper selling childhood self. The cartoon so moved James J. Brady (director of Internal Revenue in Detroit), that he organized members of the local press and the local Detroit Newsboys' Association to create the charitable foundation, the Old Newsboys Goodfellow Fund of Detroit. The fund's goal being, "No kiddie without a Christmas."