Biography: Clare Victor Dwiggins was a cartoonist who signed his work Dwig. Dwiggins created a number of comic strips and single-panel cartoons for various American newspapers and newspaper syndicates from 1897 until 1945, including his best-known strip, the long-running School Days (which appeared under a number of different titles).

Dwig's first comic strip was Home Wanted for Tags, a daily/Sunday strip for the McClure Newspaper Syndicate, which ran from 1910–1919. His longest-running strip was Tom Sawyer and Huck Finn (1918–1931), which used more than a half dozen of Mark Twain's characters but employed very little content from his novels.

Dwig began School Days circa 1909 as a single panel, and it eventually evolved into a Sunday strip with a storyline about school kids that continued until c. 1932 (including under the titles Ophelia's Slate, The School Days of Tom Sawyer & Huck Finn, and Golden Days). 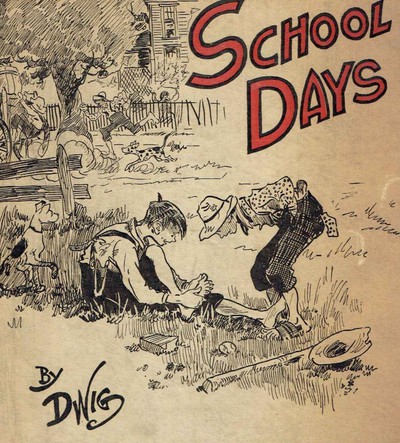