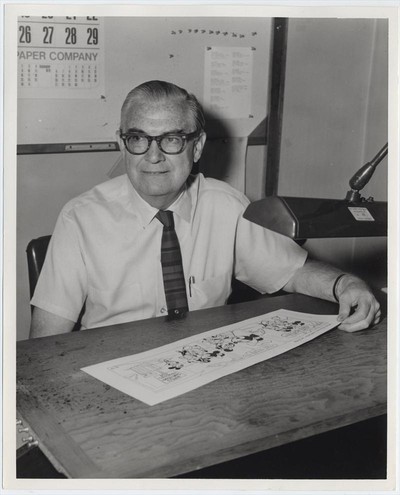 Biography: Arthur Floyd Gottfredson (May 5, 1905 — July 22, 1986) was an American cartoonist best known for his defining work on the Mickey Mouse comic strip. He learned cartooning via a correspondence course and was working as a cartoonist for trade magazines and a local Salt Lake City paper by the late '20s. In 1928 he moved to southern California, and in 1929 he was hired as an in-betweener by the Disney Studio.

In early 1930, a few months after the launch of the Mickey Mouse newspaper strip, Ub Iwerks and Win Smith, the original artists, left Disney, and Gottfredson was asked by Walt Disney to take over on a temporary basis. Shortly after, Disney, who had been writing the stip, asked Gottfedson to take over that aspect as well. Gottfredson was later asked to take on the Sunday strip as well, and was eventually promoted to head of the Disney comics department, overseeing the Mickey daily and Sunday strips, the Donald Duck daily and Sunday, and the Silly Symphonies Sunday. He usually plotted and pencilled the Mickey strips, but relied on assistants to handle the writing and inking. He pencilled the strip until his retirement in 1975.

Influences by Floyd Gottfredson (b. 1905) were stated by: