Biography: Jack Kamen was an artist who worked in comic books, magazine illustration, and advertising. He is known for his stories in EC comics and his artwork in the film “Creepshow” (1982).

His career began around 1940, providing illustrations for pulp fiction magazines and working in comics through the Harry “A” Chesler studio. Some of his work was published in Fiction House titles, particularly “Fight Comics”.

Kamen was drafted in 1942 and served in World War II. After the war, he joined the Jerry Iger Studio. His worked appeared in Fiction House again, as well as Fox Features and Harvey.

He met Al Feldstein at the Iger studio and in 1950 Feldstein introduced him to Bill Gaines at EC. He was soon working exclusively for Gaines.

He was a prolific artist at EC, drawing romance, crime, humor, horror, and science-fiction stories. He appeared regularly in “Tales from the Crypt”, “Haunt of Fear”, “Crime SuspenStories”, and the “Weird Science/Fantasy” titles.

Kamen suggested the magazine format of the ‘Picto-Fiction’ titles in response to the creation of the Comics Code Authority, but that and other efforts could not keep EC publishing comic books; by 1956 they had dropped all their four-color comic books to concentrate on their humor magazine, Mad.

From the late 1950s, he worked in advertising art.

Dean Kamen, inventor of the Segway, is his son, and Jack drew the patent renderings of the machine. 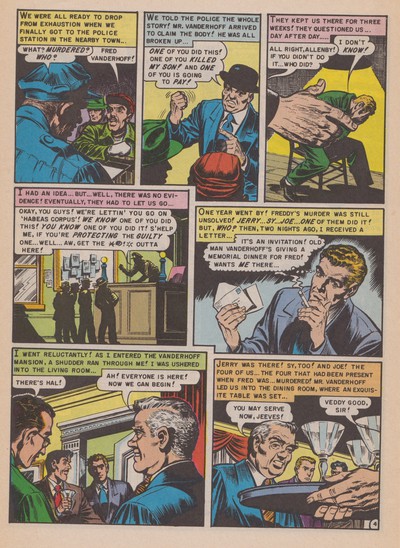