Biography: Justin Green was an American cartoonist who was a key figure and pioneer in the 1970s generation of underground comics artists. He is best known for his 1972 comic book Binky Brown Meets the Holy Virgin Mary.

Green's short comics pieces appeared in various titles and anthologies including Art Spiegelman's and Bill Griffith's anthologies Arcade and Young Lust. But in 1972, he was overwhelmed by an urgent desire to tell the story of his personal anxieties. Binky Brown Meets the Holy Virgin Mary is a solo comic book that details Green's struggle with a form of OCD known as scrupulosity, within the framework of growing up Catholic in 1950s Chicago.

In the 1990s, Green focused his cartooning attention on a series of visual biographies for Pulse!, the in-house magazine for Tower Records. It ran for ten years, later collected into an anthology known as Musical Legends.

Green's younger brother Keith Green (c. 1951–1996) was also involved in the underground comix movement, as an underground distributor from c. 1968–1975, and publishing comics under the name Keith Green Industrial Realities (as well the imprint Saving Grace) in the period c. 1971–1977.

Justin Green lived in Cincinnati, and was married to fellow cartoonist Carol Tyler. 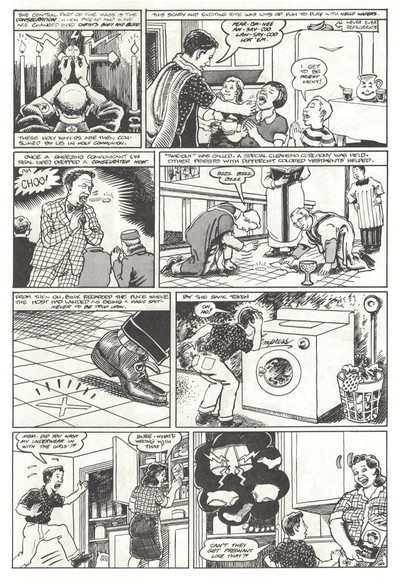