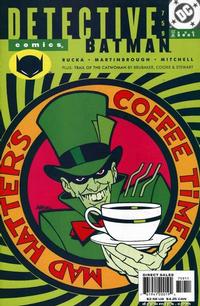 First Line of Dialogue or Text
When I was training I was taught to always examine my mistakes.
Feature Logo

Trail of the Catwoman Part 1 (Table of Contents: 2)

First Line of Dialogue or Text
I'm back in Gotham for two weeks, and it already feels like I'm home again...
Feature Logo

This story follows the events of Catwoman (DC, 1993 series) #96, the last issue of that series, where Catwoman is believed to have died.