This issue was scheduled for release on July 25, 2012, but was delayed a month by DC Comics due to content that may be perceived as insensitive in light of events in Aurora, Colorado. The issue had already been shipped to some retailers, so there may be issues that were sold to the public prior to August 22, 2012.
This issue is a variant of Batman Incorporated (DC, 2012 series) #3 [Chris Burnham Cover]. There exist further variants: 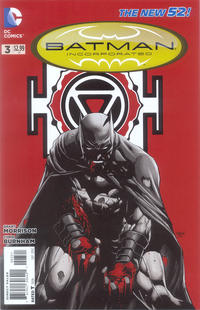 The Hanged Man (Table of Contents: 1)