The Claw Returns! (Table of Contents) 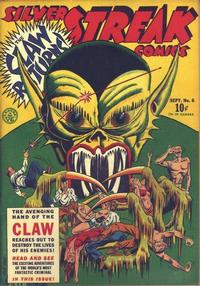 Announcing the winners of the Silver Streak Contest! (Table of Contents: 1) (Expand) /

First Line of Dialogue or Text
All of America is agog at the accomplishments of the world's ace of speed, Silver Streak --
Genre
superhero
Characters
Silver Streak (un-named taxi cab driver); Whiz (introduction, pet falcon); Sir Cedric Baldwin; Shadra; the Nazis (villains); Sheik Ali Ben Hassan (villain)
Synopsis
Sir Cedric challenges the Streak to a race, and he agrees to make it an around the world affair. On the way, the Streak fights the Nazis, rescues a girl from an evil sheik, prevents that sheik from harming a caravan of American travelers on their way to Maskat, and wins the race.
Reprints

Silver Streak was originally an un-named cab driver and his identity not revealed.

[The Flying Dragon] (Table of Contents: 3)

Genre
aviation; war
Characters
The Sky Wolf [Paul Storm]; Crane (villain, death); un-named chief (villain, death)
Synopsis
Sky Wolf comes across a weird plane used by a gang of vicious criminals who defy the law by using scientific methods to rob and plunder. He is forced to the ground and offered the chance to join the group. When he refuses, the gang throws him into a cell, from which he escapes, then uses his own plane to destroy the gang.
Reprints

First Line of Dialogue or Text
...and with our organization we can run a protection racket with them dumb ranchers.
Genre
western-frontier
Characters
Bill Wayne [aka the Texas Terror] (Texas Ranger); Hank Russel (rancher, death); Adams (rancher); un-named sheriff; Nick Carro (villain)
Synopsis
Ranger Wayne has to prevent a protection racket from moving into the west to take advantage of the cattle ranchers.
Reprints

Art credits suggested by the Who's Who.

First Line of Dialogue or Text
In the remote mountain regions of Asia, a cult of devil worshippers gather around a gigantic corpse that has been consigned to the flames
Genre
superhero
Characters
The Green Claw (villain); Major Carl Tarrant; un-named police commissioner; un-named followers of the Claw (villains, all die)
Synopsis
The Green Claw literally rises from the dead, and it's up to Carl Durrant to investigate. However, the Claw uses hypnotic powers on the major and he is shrunk and placed in a box to die while the Claw readies an army of robots to conquer the armies of the Earth.
Reprints

First Line of Dialogue or Text
I swear to devote my time on earth to make crime pay for the death of my mother and father.
Genre
superhero
Characters
Daredevil [Bart Hill] (introduction, first origin); Joe Ripper (villain, death); Ricco (villain, club owner and gang leader); Joe (villain); Conde (villain, gang leader)
Synopsis
Joe Ripper, having murdered a bank guard and stolen the bank's money, is prevented from escaping by Daredevil. Daredevil finds a clue on Ripper's body and begins to hunt down the Ricco Gang that Ripper was a part of. He arrives in time to stop the gang from destroying the rival Conde Gang and captures both gangs.
Reprints

In the 1970's, in correspondence with Jerry Bails, Rico told Jerry that he had scripted the first Daredevil story.

First Line of Dialogue or Text
After destroying the monster in the city, Lance Hale wanders into the jungles of deep Africa, to do battle with the ivory raiders.
Genre
jungle
Characters
Lance Hale; Jackie; Yamba (an elephant); Brad (villain, death)
Synopsis
After having destroyed the monster in the city, Lance heads into the jungle to do battle with ivory raiders. He sees a young boy being threatened by a lion. After saving him, a series of events leads the pair to the cabin of the ivory raiders and a fight ensues.
Reprints

[The Spook Strikes Back] (Table of Contents: 9)

Genre
detective-mystery
Characters
Ace Powers; Panther Man (villain, death); Spook (villain, death)
Synopsis
Ace has overcome the Four Madmen and has called the Police in to recover their bodies. When they arrive, only three bodies are found, and Ace realizes that Panther Man has escaped. He finds him being murdered by the Spook, and must battle the Skeleton Men to reach him in time.
Reprints

Story in printed in red, black and white. Anderson is credited on this feature by Jerry Bails' Who's Who, and the faces with the sharp arched upper eyelid, long thin eyebrows, and a small inkline under the outer corner of the eyes, are certain signs of Anderson. Also the closed hands with short lines between fingers, and a marked line under the cheeks. Look at the face in the last panel. Anderson drew Lance O'Casey, Nyoka and Red Gaucho. This story is the only one he drew of Ace Powers.

Story is printed in red, black and white. Title added by Craig Delich. The art IS signed....hard to make all of it out, but it appears to be "Gardinbirg", "Gardinking" or something like that.

[The Starfish Men of the Water Planet] (Table of Contents: 11)

Genre
science fiction
Characters
Planet Patrol [Captain Ken Keen; Nirma]; Star-Fish Men (villains, all die)
Synopsis
While on patrol one day near a weird planet, Nirma starts feeling faint and Captain Keen wonders if the planet is responsible. Diving under water, they come into contact with the Star-Fish Men, whose leader captures the duo and informs Keen that he can guide the water-planet through the universe, robbing and conquering as they go.
Reprints

Genre
adventure
Characters
Dickie Dean; Zip; Mr. Dean (head of Dean Chemical Plant, Dickie's father); Mrs. Dean; Mr. Crawley (villain, President of Zepher Aeroplane Factory, death)
Synopsis
When a plane crashes into Dickie's father's business, destroying it, Dickie tries to figure out a way he can help his parents financially. So he builds a weird type of aircraft that flies thanks to a repelling magnet, and markets the concept to the President of the Zepher Aeroplane Factory. Unfortunately, Crawley wants the invention for free and is willing to kill Dickie and Zip to get it.
Reprints

How to Build the Smallest Zoo in the World!! (Table of Contents: 13)