While the Masterwork lists only Kirby as the artist, Craig Delich says that Simon inked it (based on data given to Jerry Bails), and Dr. Michael Vassallo also leaned towards a Kirby/Simon credit in his notes to the Timely-Atlas list. 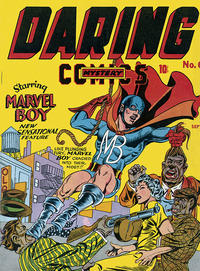 Found on the inside front cover, reproduces the cover of Red Raven Comics #1 as well as splash panels from the interior.

Next appearance in USA Comics (Marvel, 1941 series) #7, although Young Avenger in USA Comics #1 is arguably a reworked version of this character as Will Murray notes in the Daring Mystery Masterworks introduction.

According to Kirby Museum, "Joe would do the starting pages of the story and then Jack would do the rest." So Simon penciled pages 1-3 of this story, then Kirby did 4-10. Simon inked it all. http://kirbymuseum.org/blogs/simonandkirby/archives/637

The first Kirby work on a brand new superhero.

Mendryk believes the inker is different for each artist, possibly with several inkers.

The Legion of the Doomed (Table of Contents: 3)

Craig Delich confirms Simon as sole writer and inker from information given to Jerry Bails, although Mendryk believes the inker is different for each artist, possibly with several inkers.

First Line of Dialogue or Text
The Man of the Day after To-morrow
Genre
humor; satire-parody; superhero
Characters
Stuporman [Marmaduke Snood, Jr.] (introduction); Mike Muskrat (villain, introduction); Professor Plotz
Synopsis
Stuporman is awakened from his nap to fight a criminal who has brainwashed a genial college professor into creating diabolical inventions to support his crimes.
Reprints

A black and white Stuporman story, built mostly out of panels from this story (rearranged, with some new panels added), appears in the October 1940 issue of Snap, one of Martin Goodman's pulp magazines. Thanks to Frank Motler for this information.

The article on Leonard Sansone indicates that Sansone did inks or some of them on this story (Alter Ego #121, November 2013).

Scales of Justice (Table of Contents: 6)

The winners from the Daring Comics Contest on the inside front cover of issue #2 are announced in a box at the bottom of the 2nd page. However, no indication of which characters they picked is given. Murray Forman won the 1st Prize of $5, Jackie Gorman won 2nd Prize of $2, and there were 18 other winners of $1 each.

[The Schustak Case] (Table of Contents: 7)

There is some confusion as to whether this story was drawn by L. Bing or Munson Paddock, as they had similar styles. Who's Who first recorded Bing, then revised to Paddock. Hames Ware and Jim Vadeboncoeur, Jr., while compiling the Masterworks credits with Dr. Michael J. Vassallo, discussed the possibilities and decided that the artist was indeed L. Bing as was originally thought.

[The Kidnappers and the Magician] (Table of Contents: 8)

Genre
adventure
Characters
Monako; Pere (introduction); an old Hag (villain, introduction)
Synopsis
Monako spots a drugged man being held by thugs at one of his shows. Monako and his friend Pere must rescue the man's sister from a mysterious old hag.
Reprints

Last golden age appearance. There is a teaser for a Monako story in the next issue, but it never appeared. However, a "Mantor the Magician" story appeared in Human Torch (Marvel, 1940 series) #2 alongside other Daring Mystery orphans, which looks suspiciously like a reworked Monako, although by Al Gabriele instead of regular Monako artist Larry Antonette. Next appearance in The Marvels Project (Marvel, 2009 series) #2.

[The Origin of Dynaman] (Table of Contents: 9)

[The Coming of Tigerman] (Table of Contents: 10)

The introductory blurb talks about Tigerman's "tamed Bengal tiger, Balu", further indicating a connection to the Trojak, the Tiger-Man feature that appeared in issues #2-5. However, Balu does not actually appear in the story, and the supporting cast and plot are different than the continuing story and cast of Trojak.

First Line of Dialogue or Text
Under Water Swimming Goggles