Joe Simon began editing for Timely on a freelance basis with Red Raven Comics #1, which came out the previous month. It is not clear if he immediately started editing Marvel Mystery Comics as well or not, although he was definitely the editor by issue #12 as discussed in that index. 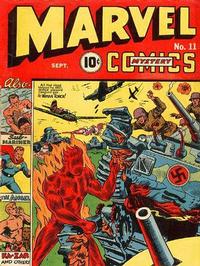 [Plague in the Slums] (Table of Contents: 2)

[The Capture of Luther Robinson] (Table of Contents: 3)

Genre
superhero
Characters
The Sub-Mariner [Prince Namor]; Mr. Martin (sailor); Tha-Korr; Dorma; Princess Fen; Luther Robinson (villain); Mickey (villain); Lynne Harris (villain)
Synopsis
Luther Robinson follows Namor back to his Antarctic home and attempts to capture him -- dead or alive -- but is eventually taken prisoner himself. He is informed that his girlfriend is also being held to insure he will not try to escape justice.
Reprints

Writer revision from Al Anders to ?. The Who's Who lists no writer for this strip. Notes added by Craig Delich 2008-12-19.

Genre
jungle
Characters
Ka-Zar [David Rand]; Zar (a lion); Trajah (an elephant); Jim VanGelder; Rajah Sarput (villain, introduction); Bradley (villain, introduction)
Synopsis
When an evil man named Sarput takes possession of a large tract of land in the Belgian Congo jungle, Ka-Zar and Zar do battle with him to prevent the slaughter or capture of many animals, only to be taken prisoner themselves.
Reprints

Story contains 2-page spread (pgs. 4, 5) and is continued next issue.

[Mayhem at the Midget Race Track] (Table of Contents: 6)

Murder Is an Accident (Table of Contents: 7)

Genre
adventure
Characters
Dr. James; Nurse Cassidy; Francis (villain)
Synopsis
The fact that five of the leading physicians in the area had died in fatal accidents the last two weeks didn't bother Dr. James, that is until he suddenly is visited by a rather strange patient.
Reprints

[The Devils of the Mist] (Table of Contents: 8)

Genre
superhero
Characters
The Angel [Tom Halloway]; unnamed woman (introduction, death); the ghouls (villains, introduction, all die)
Synopsis
The Angel is captured by a group of in-human monsters who take him to their abode where he meets a beautiful girl dressed in ancient Greek garb and learns the creatures destroyed her civilization 4000 years ago and now threaten to do the same in modern times.
Reprints

The Angel gains glider wings that once belonged to "Mercury".