Emeralds of Death (Table of Contents) 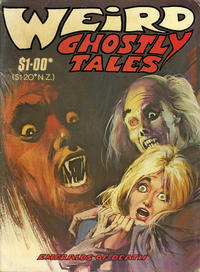 The Missing Emeralds (Table of Contents: 1)

The Cobra (Table of Contents: 2)

When the Sea Goes Dry! (Table of Contents: 3)

This story from Strange Journey #1 was originally printed as "Death Holds an Auction" in Strange Fantasy (Farrell, 1952 series) #2 (October 1952). The art is the same as the original, with changes to the dialogue and title for Code approval.

The Ghost-Killer Who Vanished! (Table of Contents: 4)

The Transplants (Table of Contents: 6)

Which Witch is Which? (Table of Contents: 7)

The Bloody Nightmare (Table of Contents: 8)