editor from Feature 36
This issue has variants: 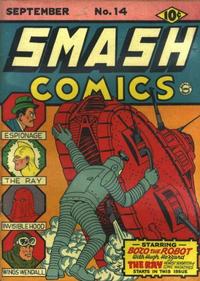 The Legion of Living Bombs (Table of Contents: 1)

Genre
spy
Characters
Espionage [Black X]; Batu; Madame Doom (villain); Mirov (villain)
Synopsis
Black X resigns his commission due to his love for Madame Doom, but her plan to use her men as human explosives so revolts him, he changes his mind.
Reprints

Will Eisner created the Espionage feature, and Will Erwin was a pen name used by Will Eisner (Erwin was Eisner's middle name) until he left the strip after 1940. It also became a house by-line as well for future writers.

[Fatima the Queen] (Table of Contents: 4)

First Line of Dialogue or Text
This is bad news! Drive off a cliff...
Genre
humor

[The Invasion of Tronvik] (Table of Contents: 7)

In this adventure only, the Ray's legs were colored as bare instead of yellow.

First Line of Dialogue or Text
A sleek yacht glides majestically into the harbor of a tropical island in the Pacific...
Genre
superhero
Characters
The Invisible Hood [Kent Thurston]; John Wallace; Renly (villain); Darke (villain); Matt (villain); Spike (villain)
Synopsis
While on a tropical isle in the south Pacific, the Hood encounters other invisible opponents, who are intent on acquiring valuable gas deposits. Their invisibility was a ruse, but they were surprised when they encountered a "real" ghost.

[Mountain of Madness] (Table of Contents: 11)

Mystery of the Mine (Table of Contents: 12)

First Line of Dialogue or Text
I have it! My uncle is the president of a steamship company!
Genre
adventure
Characters
The Purple Trio [Tiny Todd; Rocky Hill; Warren]
Synopsis
One of the trio's uncles is president of a steamship company and he tells the boys that he suspects a certain criminal of being in league with spies who are trying to ruin his firm's shipping in the Dardanelles. The Trio immediately volunteers to round up the felon and turn him over to the Turkish Police.

[The Monster from the Graveyards] (Table of Contents: 15)

Genre
science fiction
Characters
Hugh Hazzard; Bozo the Robot; un-named mad scientist (villain, death); Brutus (villain, introduction, a monster, death)
Synopsis
Bozo truly meets his match in a modern-day Prometheus named Brutus, created by a mad scientist, who stole its body parts from graves. Battling to a stalemate, the encounter only ended when Bozo threw Brutus into his creator, destroying both of them.