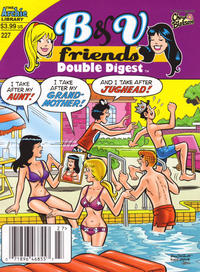 The Big Storm (Table of Contents: 2)

Scent-er of Attention (Table of Contents: 3)

Betty breaks the fourth wall and talks directly to the reader.

Genre
humor; teen
Characters
Josie; Valerie; Alan M.; Alexander Cabot III; Alexandra Cabot
Synopsis
Alexandra is so pathetically love-struck over Alan M. that she goes into insane ecstasy at the mere mention of his name. Even Josie takes pity on Alexandra and asks Alan to pay a little attention to her. But as soon as he's nice to her, she takes it as a sign that he doesn't love her.
Reprints

Alexandra acts a lot like Betty Cooper in this story, and it has been speculated that this could be a "Betty acts crazy over Archie" script rewritten for this title.

Fun in the Sun Fashions (Table of Contents: 11)

Illustration used as the title page for the next section featuring Sabrina reprints.

Use the clues to find the mystery word.

Unscramble the phrase to find out why Veronica is always on the phone.

Genre
humor; teen
Characters
Veronica Lodge; Betty Cooper; Archie Andrews; Jughead Jones; Reggie Mantle
Synopsis
Veronica imagines what it would be like for her and Betty to be pirates.
Reprints
Keywords
pirate

Friends Till the Bitter End (Table of Contents: 31)

Genre
teen
Characters
Betty Cooper; Veronica Lodge; Midge Klump
Synopsis
The girls' discussion about the strong bonds of their friendship soon gets out of hand.
Reprints

The Ultimate Power! (Table of Contents: 32)

Illustration used as the title page for the next section featuring Cheryl Blossom reprints.

Phantom of the Funhouse (Table of Contents: 34)

An End to Freedom (Table of Contents: 38)