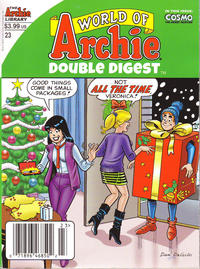 The Visit (Table of Contents: 1)

Genre
teen; humor
Characters
Archie Andrews; Veronica Lodge; Mr. Lodge
Synopsis
When Hiram Lodge refuses to buy a Christmas tree, Archie and Hiram go into the forest to cut down a tree and end up getting chased by a bear.
Reprints
Keywords
Christmas tree

One Last Gift (Table of Contents: 4)

Genre
humor
Characters
Cosmo; Orbi; Professor Thimk; Astra
Synopsis
Cosmo and his cowardly pal Orbi are chosen to man the first Martian expedition to Earth, but the rocket crash-lands on the Earth's moon instead.
Reprints

Story features minor grammatical changes from original. The "Cosmo the Merry Martian" logo is also inserted on page one and the story title is shrunk to fit.

Genre
humor
Characters
Cosmo; Orbi; Moonlings
Synopsis
Cosmo and Orbi meet the creatures who live on the Earth's moon, all of whom are named "Oog." The Moonlings show the visitors their civilization, and explain that they are invisible to Earth people.
Reprints

Changes include the removal of Chapter 2 above the story title. Features a full-page map of Moon City.

Genre
humor
Characters
Cosmo; Orbi; Moonlings
Synopsis
After spraying Cosmo and Orbi with "comet dust" so they, too, will be invisible on Earthlings, the Moonlings take the Martians to Earth, where they observe the planet's most fascinating and complex activity: a baseball game.
Reprints

Story includes grammatical changes from original and removal of the policemen's gloves and Chapter 3 above the story title. In the ball game sequence, one of the advertisements is for the comic series Pat the Brat. In the next issue tease, Cosmo the Merry Martian is replaced by World of Archie.

Romance Throughout History! (Table of Contents: 21)

The Father of Invention (Table of Contents: 22)

Never Too Late (Table of Contents: 24)

Genre
teen; humor
Characters
Archie Andrews; Betty Cooper; Veronica Lodge; Pop Tate; Jughead Jones; Mr. Lodge; Fred Andrews
Synopsis
Archie waits until the last minute to buy Christmas presents and ends up without any presents to give, until he decides to donate the money to charity in everyone's name.
Reprints

Genre
humor; teen
Characters
Betty Cooper; Veronica Lodge; Hiram Lodge; Alice Cooper; Smithers
Synopsis
Betty finds a sweater she wants to give Archie for Christmas, but she doesn't have enough money with her. Veronica has seen this and, when Betty leaves to get more funds, swoops in and buys up the remaining two sweaters. When Mr. Lodge finds out, he takes matters into his own hands.
Reprints
Keywords
Christmas

Genre
humor; teen
Characters
Archie Andrews; Veronica Lodge; Mr. Weatherbee; Santa Claus
Synopsis
If Mr. Weatherbee is stuck on his roof (Archie's fault of course), then who is the Santa that showed up at the orphanage?
Reprints
Keywords
Christmas; Christmas tree; orphanage