This issue is a variant of World of Archie Double Digest (Archie, 2010 series) #20 [Direct Edition]. 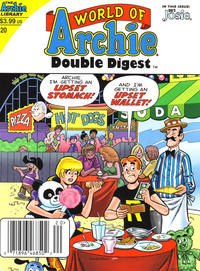 All Wet (Table of Contents: 2)

Genre
teen; humor
Characters
Archie Andrews; Reggie Mantle; Mr. Weatherbee
Synopsis
Mr. Weatherbee goes kayaking and proves to be better at it than Archie and Reggie. His secret? His weight puts a hole in the kayak which allows his feet to walk down the river.
Reprints

Cool It (Table of Contents: 5)

Genre
teen; humor
Characters
Betty Cooper; Mrs. Cooper; Mr. Cooper; Archie Andrews
Synopsis
Disturbed by all the reminders of Archie that Betty has put up around the house -- including a life-size waterproof Archie in the shower, a recording of Archie's voice saying romantic things, and Archie photographs on her ceiling -- her dad tries to convince her to play hard to get.
Reprints

The Challenge (Table of Contents: 6)

Tennis Anyone? (Table of Contents: 8)

Genre
teen; humor
Characters
Josie; Melody; Pepper; Albert; Alexander Cabot III; Alexandra Cabot
Synopsis
Josie, Melody and Pepper want a fourth for tennis, but every person runs away in terror when asked to step out on the courts with them. When Alexandra manages to trick her brother into becoming their fourth, we find out why everyone avoids them: they cause massive injury to any tennis partner.
Reprints

Genre
teen; humor
Characters
Josie; Melody; Pepper; Albert
Synopsis
After Josie complains about Albert's slovenly appearance, Pepper and Melody take him in for a makeover, and he gets attired and coiffed according to the latest Carnaby Street style: "If you're not London, you're lost!"
Reprints

Genre
teen; humor
Characters
Josie; Melody; Pepper; Albert; Alexander Cabot III; Alexandra Cabot
Synopsis
Alex borrows a remote-controlled army of toy soldiers and rockets from his father's factory, and uses them to wage total war on Albert. To protect Albert and defeat her brother, Alexandra retaliates with a simpler weapon: a gorilla. Unfortunately, the gorilla falls in love with Josie and knocks out Albert.
Reprints

Genre
teen; humor
Characters
Pop Tate
Synopsis
Unscramble the words below to discover the secret ingredients in some of Pop's recipes.
Reprints

Poems referred to in the story include Longfellow's "A Psalm of Life" ("Footprints on the sands of time"), Kipling's "The Female of The Species" and Kipling's "The Vampire" ("A rag and a bone and a hank of hair").

Genre
humor; teen
Characters
Betty Cooper [as herself and as Marion]; Veronica Lodge [as herself and as Princess Veronica]; Archie Andrews [as himself and as Archie Hood]; Jughead Jones [as Friar Juk]; Moose Mason [as Little Johnny]; Dilton Doiley [as Dil Scarlet]; Reggie Mantle [as The Sheriff Of Nuttyham]
Synopsis
Bored with watching Veronica and Archie attempt archery, Betty has a daydream that she is in the middle of the Robin Hood legend.
Reprints
Keywords
archery

Genre
teen; humor
Characters
Reggie Mantle; Archie Andrews; Jughead Jones; Betty Cooper; Veronica Lodge
Synopsis
On a hot day, Reggie annoys Archie by asking "hot enough for you?" and then gets the other kids to say the same tired old phrase to the sweltering Archie.
Reprints

A Date For All Seasons (Table of Contents: 23)

Svenson Cleans Up (Table of Contents: 27)

It Blowed Up Real Good! (Table of Contents: 32)

Genre
teen; humor
Characters
Professor Flutesnoot
Synopsis
Cross out the letters in the odd-numbered boxes to discover the first law of chemistry.
Reprints

Being Flip (Table of Contents: 35)

Torpedo The Sub! (Table of Contents: 36)