On-sale date from copyright registration. All story synopses and notes from Craig Delich.

It is believed that this cover was originally intended for All-Star Comics #3 until the concept of the JSA was finalized. 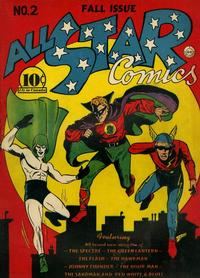 [Sacrifice for Yum-Chac] (Table of Contents: 2)

Genre
superhero
Characters
Hawkman [Carter Hall]; Chet Norris (Aztec specialist); Irene Norris (Chet's sister); unnamed Sheriff of Itza; Nyola (villain, death); "The Indian" (villain, associate of Nyola); Yum-Chac medicine man (villain)
Synopsis
While flying over the city one evening looking for a hint of crime, Hawkman spots the Police leaving a suburban home. Investigating, he discovers the body of a woman inside who appears to have drowned, and a glass knife near her body. Taking the knife with him, as Carter Hall he researches the knife and finds that it was involved in Aztec ritual involving Yum-Chac, their rain god. Carter decides to visit an Aztec specialist about it and discovers he has been tied up, and learns that his sister has been kidnapped to be sacrificed to the Aztec god. Immediately Hawkman heads out to rescue her.
Reprints
Keywords
Itza; Yum-Chac the Aztec Rain God

Genre
superhero
Characters
The Green Lantern [Alan Scott]; The "robot" men; Baron von Zorn (villain)
Synopsis
Throughout many U.S. cities, hoards of men: vagrants, hobos and tramps, have disappeared, but then are suddenly pillaged by troops of wild-eyed, robot-like figures. Alan Scott, reading of these crimes, visits the morgue where bodies of some of these robot-men are found and examines a sample of their blood, recognizing a drug in their systems that paralyzes the human nerve cells. Scott disguises himself as a bum, is taken into captivity with other such men, then changes into the Green Lantern to clean up this evil plot by Baron von Zorn and restore the others to their sanity.
Reprints
Keywords
Daily Star; Lamp of Power; Oath; Power Ring; Rocky Point

The last panel features an illustration of the Green Lantern and readers are told that his further adventures can be found in All-American Comics each month.

Genre
superhero
Characters
The Spectre [Jim Corrigan]; un-named Police Chief; unnamed museum curator; Benson (museum guard); Kulak (villain, High Priest of Brztal, introduction, presumed death); The Legions of Brztal (villains, introduction for all)
Synopsis
Jim Corrigan investigates the theft of an ancient manuscript so old that it had to have belonged to a lost civilization. The guard on duty the night of the theft was in shock and could only say "Kulak! Kulak!" The Spectre takes over, materializes a vision of the stolen parchment, reads it, and then comes face-to-face with Kulak, who warns the Ghostly Guardian to lay off or else! Kulak brings several plagues upon the city, which the Spectre eliminates, then he comes face to face with Kulak for the final battle engagement.
Reprints
Keywords
Brztal; The Oriental Museum; The Parchment; The Ring of Life; The Whispering Death

Kulak next appears in All Star Squadron #20.

The last panel features an upper body illustration of the Spectre, and informs readers that the Spectre's adventures can be found in More Fun Comics and in future issues of All-Star Comics.

[The Glowing Globe] (Table of Contents: 5)

Genre
superhero
Characters
The Sandman [Wesley Dodds]; Sir Basil Lorimer (medical doctor, death); unnamed detective; Sir Basil's brother (villain, death)
Synopsis
Wes Dodds is visiting a noted medical man, Sir Basil, when the radio blares a story of mysterious deaths in which lives were taken by an unknown force. Changing to the Sandman, he discovers Sir Basil dead, but is then over-come by a strange glowing globe known as the "Life Stealer". Fortunately he recovers and sets a trap for the yellow-faced villain, who, in turn, knocks out Sandman and discovers his true identity, then submitting Dodds to the Life Stealer again. Dodds recovers, oversomes the glowing orb, and finally subdues the villains, who commits suicide.
Reprints
Keywords
Gas Gun; Life Stealer; Scientist Bank and Trust Company; United States Treasury

Genre
adventure
Characters
Red Dugan; Whitey Smith; Blooey Blue; Doris West; unnamed Fire Chief; unnamed Street cleaner (death); Sherm (G2 chemist); unnamed G2 building superintendent; unnamed G2 clerk; Truck Bieler (villain); Rusty (villain, Bieler's accomplise); Professor Leaman (villain)
Synopsis
Red Dugan and Doris are walking along the street when a fire truck races by them, and they follow it to the fire. Checking the building over with an arson investigator, they discover a body in the rubble, and gas tanks. Red picks up a badge at the scene and investigates how it could have gotten there. With the help of Whitey and Blooey, they discover a plot by someone to use a peculiar gas to make the writing on important government documents disappear, then steal them to obtain the secrets.
Reprints

The story was edited from its original format for Comic Cavalcade #1 to reflect changing editorial policies to remove swearing, provacative clothing, and a dead body, per Kevin Wilkens.

The final panel blurb tells readers that they can follow further adventures of Red, White and Blue in All-American Comics.

[The Darling Apartment] (Table of Contents: 8)

Genre
humor; superhero
Characters
Johnny Thunder; The Thunderbolt [Archibald]; Daisy Darling (Johnny's girl); Herman Darling (real estate businessman); Mr. Throstle; Hiram Crooker (villain, political boss); Faber (villain)
Synopsis
Herman Darling has just bought up some property in order to build apartment houses, but when he goes over to that property, the former owner refuses to leave. Johnny decides to help his girl friend's father, so he goes over to do the job of throwing the former owner out...but he gets thrown out himself! Through a series of mis-adventures, and the help of the Thunderbolt, Johnny accomplishes the task.
Reprints
Keywords
Davis Pool Room; Herman Darling Real Estate; Say You

Thunderbolt is shown only a a red bolt of lightning.

The Invisible Star (Table of Contents: 9)

Genre
science fiction
Characters
Ric Martin; Gus Henchard (Ric's pal); Lona; Lona's mother
Synopsis
Ric Martin, U.S. Ambassador to Mars, is very concerned about a Martian military build-up as a precursor to war. A sign of trouble was that Earth's temperature, in the dead of winter, had reached 125 degrees plus and rising, and the body count was mounting. To Ric, the only solution was to move Earth's population to another planet because of a new star that had appeared (yet invisible) that was causing the rising temperatures. The mission was accomplished just before the planet Earth blew up.
Reprints
Keywords
The Lightning (space ship)

Story takes place in February of 2450.

[Here's How You Can Get the Next Issue of All-Star Comics Free] (Table of Contents: 11) (Expand) /

The closing panel, illustrated with The Hour-Man, Jimmy Martin and Thorndyke, encourage readers to follow their adventures in Adventure Comics.

[The One-Man Newspaper] (Table of Contents: 14)

Genre
superhero
Characters
The Flash [Jay Garrick]; Bill Jackson (mention only); Joan Williams; Anne Baxter; Mr. Baxter (Editor/owner of the Daily Column, Anne's father); The Boss (villain); The Boss' gang (villains)
Synopsis
Jay Garrick decides to visit a friend, Bill Jackson, at the Daily Column newspaper office, but is shocked to find the building absolutely empty of people! As the Flash, he decides to go ahead and publish an edition of the newspaper to see if those responsible for the staff's disappearance will be curious enough to come over to the newspaper office and investigate. They do and Flash starts rounding the gang up, one by one, to the Police. But The Boss threatens to kill the owner of the paper if he doesn't sell off the newspaper to him.
Reprints
Keywords
The Daily Column

The final panel blurb at the end of the story, with illustration of the Flash, tells readers that they can follow the Scarlet Speedster's further adventures in Flash Comics.