Skeleton Hand in Secrets of the Supernatural #4
(March-April 1953) 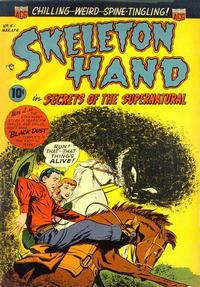 The Dream Keeper! (Table of Contents: 3)

Beyond the Grave! (Table of Contents: 4)

Mirror of Doom (Table of Contents: 6)

Horror in Hollywood (Table of Contents: 7)

Genre
horror-suspense
Characters
Sandra Forbes (actress, death, reincarnated as a ghost); Glenn Maxwell (Empire Studios producer); Don Wayne; Merry Lewis (actress); Dis (villain, a god inhabiting an iron body)
Synopsis
During the making of the film, "The Gladiator," Sandra discovers the Trumpet of Dis among other real Roman artifacts to be used in the movie. When she learns that, by blowing the trumpet, she'll come under the spell of the ancient Roman god Dis and will share his powers, she decides to blow it and get revenge on the other cast members who do not want her to star in the film.
Reprints
Keywords
Empire Studios; Trumpet of Dis

Page correction from 6 pages to 7 pages by Craig Delich.

The Roman god, Dis, was believed by the Romans to be the ruler of the infernal regions, and the Romans would surrender a bride to him each year to win the mercies of this grim deity.