First Line of Dialogue or Text
...And do not do it with a green chick unless you're on Orion!
Genre
humor
Characters
Kirk; Spock; Scotty
Synopsis
Kirk advises his crew on interracial relations.
Keywords
action figures; Andorian Tequila; fumetti; Orion; Twisted Toyfare Theatre 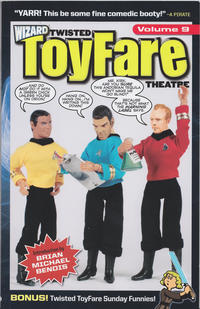 Shanks for the Memories (Table of Contents: 1)

Several characters are not identified.

Mutiny for the Bounty (Table of Contents: 2)

Special thanks to: Arbona, Sean T. Collins, and Ricky Purdin.

A Goomba with a View (Table of Contents: 3)

Special thanks to: Arbona, Sean T. Collins, and Ricky Purdin.

One character is unidentified.

Spocked Up (Table of Contents: 4)

This is a parody of the movie "Knocked Up."

The Blues Fellowship (Table of Contents: 5)

The Once and Future Kang (Table of Contents: 6)

One of the future characters is unidentified.

This is a parody of Battleship game.

A few characters have not yet been identified.

Lord Voldemort and the Homecoming of Doom (Table of Contents: 11)

The article text in the Daily Prophet is the script of the story.

Some characters may not be identified, but they are most likely intended to be generic background characters.

Islands of Advengeance! (Table of Contents: 12)

Genre
humor
Characters
Spider-Man; Dr. Strange; Mr. Fantastic; Franklin Richards; Professor Xavier; Hulk; Thing; Kingpin; Alan Moore; Polar Claw; Willy Wonka; Dr. Doom; Iron Man; Mephisto; Mother Doom; Man Thing; Batman; Catwoman
Synopsis
Spider-Man, Dr. Strange, Mr. Fantastic, Franklin Richards, and Professor Xavier crash land on an island. The island has magical properties. They discover that they all received mysterious free tickets to Hawaii. Franklin goes missing, and they go to find him. The are caught by Alan Moore. He takes them to see the Others, who are Megos who have been cast out of Megoville due to copyright problems. They are led by Dr. Doom. He tries to trade Spider-Man, Mr. Fantastic, and Alan Moore to Mephisto for his mother, but Moore escapes. They are all returned to Megoville.
Reprints
Keywords
action figures; chocolate; fumetti; Hawaii; Lost; Starbucks; Twisted Toyfare Theater; Watchmen; Willy Wonka and the Chocolate Factory; Xbox

This is a Lost parody.

This is a parody of the shows "Dharma & Greg" and "Lost."

The Mirror Has Two Phasers (Table of Contents: 14)

Genre
humor
Characters
Scotty; Spock; Kirk; Uhura; Mirror Kirk; Mirror Bones; Mirror Uhura; Mirror Scotty; Grok; High Inquisitor Spock; Female Kirk; Spockette
Synopsis
On the ship, Kirk receives a distress call from himself. He and Spock go to the Mirror Universe, where they learn that the Klingons are their allies and the Vulcans their enemies. The Vulcans are trying to wipe out all logic in the universe. High Inquisitor Spock threatens and captures them. They are saved when Spock goes through the Pon Farr of Reasponsableness. While they are distracted, red shirts kill the Vulcans. Kirk and Spock are then transported to a universe where they are women.
Reprints
Keywords
action figures; alcohol; Danny Bonaduce; fumetti; High School Musical; Klingons; Mirror Universe; Miss Teen U.S.A.; Mustache of Patience; Neil Patrick Harris; O'Douls; Pon Farr; tea; tribbles; Twisted Toyfare Theater; Twizzlers; Vulcan Tuna Meld; Vulcans; Wiener Mobile; Wilt Chamberlain

A parody of the Absolut Vodka advertisements.

The Further Adventures of Frozen Cap (Table of Contents: 17)

Genre
humor
Characters
Don Blake; Jane Foster; Wrecker
Synopsis
Don Blake can't find his cane, and asks Jane where it is. She is upset he cares more for his cane than her. He can't stop Wrecker without his cane.
Keywords
cane; parody; Toyfare's Sunday Funnies

The Dark Side (Table of Contents: 21)

Genre
humor
Characters
Peter; Sadu-Hem; Hellboy; Abe Sapien
Synopsis
Peter writes a tablet asking if the other writer believes in a higher power. Tentacles come out of the sky and pull him in.
Keywords
parody; tablets; Toyfare's Sunday Funnies

Calvin and Hyde (Table of Contents: 24)

Genre
humor
Characters
Calvin [Mr. Hyde]; Moe [Captain America]; Hobbes
Synopsis
Calvin pretends to drink a formula that will turn him into a monster that can take down Moe, but it doesn't work.
Keywords
formula; parody; Toyfare's Sunday Funnies