The Rogues of Skullbone Bwana (Table of Contents) 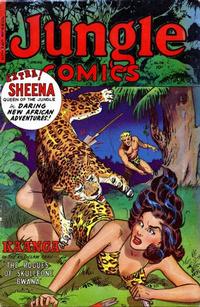 Glory or Death! (Table of Contents: 1)

Genre
jungle
Characters
Kaänga; Ann Mason; M'sungu; Hara Kiri Men; Tonga; Smithers; Boluba; Bradshaw
Synopsis
As part of a plot to get control complete control of the trading post and diamond mine that they co-owned, Bradshaw disguises himself as a spirit and persuades many warriors to join a suicide cult, promising that they will become great chiefs. Kaänga exposes the fraud and disperses Bradshaw's forces.
Reprints
Keywords
disguises; leopards; masks; morning stars; whips

Sequence added by Saltarella via the GCD Error Tracker.

Last appearance of this feature.

Although the cover promises "new" Sheena stories, this story is primarily composed of artwork from the linked story, completely re-written, though also with many newly-drawn panels.

Spoor of the Demon Ape (Table of Contents: 5)

Pool of Peril (Table of Contents: 6)

This story continues from "Conjure Man's Kraal" in this issue.