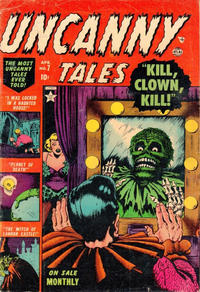 Job Number
C-106
Genre
crime; horror-suspense
Synopsis
A clown kills his clown rival so he can have his fame and his girlfriend. He tries to find a plastic surgeon to alter his looks so he will appear as the dead man, but fails. The police track him back to circus where he is shot resisting arrest. He dies at the foot of the woman he professes his love to as he realizes she is blind.

The Witch of Landor (Table of Contents: 2)

Job Number
C-61
Genre
horror-suspense
Synopsis
A duke forces a witch to call up his ancestor so that he can ask the ghost where the castle's hidden treasure is. When the witch does as she is bidden, the ghost replies that the treasure location was a secret even in his time and that the duke will have to seek further back. The witch calls up several spirits in succession without the knowledge of the treasure's location until she calls up a gorilla which strangles the duke.
Reprints

The Twins (Table of Contents: 3)

[Statement of ownership] (Table of Contents: 4)

The Gal Who Talked Too Much! (Table of Contents: 5)

Job Number
C-259
Genre
horror-suspense
Synopsis
A (mad?) scientist looking for 'volunteers' to spend the rest of their lives buried in a time capsule gives two sleeping pills to a husband and his blabber-mouth wife, lying to the both of them that they can be rid of each other if they administer the pill to their spouse. While they are asleep, he transfers both of them to the time capsule.
Reprints

Possible Brown pencils per Nick Caputo, July 2013, who notes that while the inking obscures the pencils there are a number of figures and poses that look like Brown's style.
Art identification confirmed by Jim Vadeboncoeur, Jr.

Planet of Death! (Table of Contents: 6)