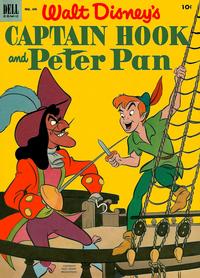 Genre
adventure; children
Characters
Captain Hook; Mr. Smee; The Mermaid Kingdom (The Mermaid Queen); Capitan Pancho; Peter Pan; Wendy Darling; Tinker Bell; John Darling; Michael Darling; The Lost Boys
Synopsis
Peter Pan is given a treasure map to the Mermaid Queen's treasure. Captain Hook tries to get the map from Peter but only gets half after he accidentally cuts it in half. Tinker Bell tries to find the map on Hook's ship, but is captured and held for ransom. After fooling Hook with a fake map, Peter gets both halves of the map and takes Wendy and Peter and the Lost Boys with him on a boat to find the treasure at Skull Rock. Hook and his crew follow him and there's a battle over the treasure.
Reprints

Adaptation of the 1952 Walt Disney animated motion picture "Peter Pan", which was based on "Peter Pan" by Sir James Matthew Barrie (1911). Letters credit for this sequence from Alberto Becattini (May 14, 2007)

Inside back cover. Also contains answers to Treasure Map puzzle on inside front cover.

[Fighting on the Ship] (Table of Contents: 4)