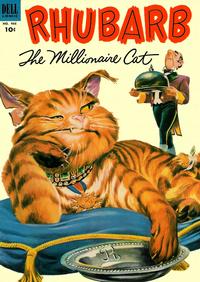 Genre
animal
Characters
Rhubarb (cat)
Synopsis
A superstitious lady is upset when Rhubarb rubs her legs after he had walked under a ladder.

inside front cover; black and white. Pencils and inks credits for this sequence from Alberto Becattini (May 14, 2007)

[Rhubarb Gets Amnesia] (Table of Contents: 2)

Genre
animal
Characters
Rhubarb (cat); Eric Yeager; Polly Yeager; Doom (butler)
Synopsis
Unknown to Eric and Polly Yeager, his guardians, Rhubarb the cat, who inherited a fortune when his owner died, is slipping away from the estate each night to carouse with the neighborhood cats. While on one escapade, Rhubarb is clipped on the head by a thrown shoe, causing amnesia. A city-wide appeal is made for his return. A young boy has a cat that looks like Rhubarb and takes him to the Yeagers, wanting to be made a bat boy on the Brooklyn baseball team that Rhubarb owns. The impostor cat escapes and comes back to the boy, who is guilt-stricken and returns with the cat to the Yeagers to confess his deception. At this time, the real Rhubarb, who had been in the neighborhood all the time, but looks black after falling in muddy water, wanders in the door. He chases the fake and in the process falls in a tub of water which cleans off the mud. An encounter with an electric cord while he's wet causes a shock that cures his amnesia.

Story continues on inside back cover in black and white and concludes on back cover in color. Sequel to story in Four Color (Dell, 1942 series) #423 (1952). Pencils and inks credits for this sequence from Alberto Becattini (May 14, 2007).