Lair of the Renegade Killer (Table of Contents) 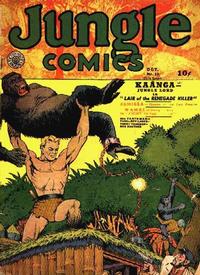 Lair of the Renegade Killer (Table of Contents: 1)

first line: "Kidnappers from the civilized world meet the wrath of jungle justice,..."

Ann does not appear in this story.

Primates or Apes (Table of Contents: 3)

First Line of Dialogue or Text
Tabu rallies the ghost animals of a peaceful valley against a band of ruthless hunters...
Genre
jungle
Characters
Tabu
Synopsis
Hunters, using poison gas and electrified water holes, slaughter the animals in Tabu's jungle. Tabu retaliates by conjuring up the ghosts of the dead animals and the hunters are chased into a stream and Tabu converts into quicksand.
Keywords
airplanes; big game hunting; ghosts; lightning; poison gas; quicksand; stereotyping of African natives

Jim Vadaboncouer posits that the art is possibly by John Rosenberger; Wilhelms may have touched up the more polished faces on page two.

Fight To the Finish (Table of Contents: 5)

first line: "Zari dead! Who did this useless killing?"

Jitterbug in the Jungle (Table of Contents: 6)

First Line of Dialogue or Text
Across the great inland sea comes a scouting party from Cartho...
Genre
jungle
Characters
Sir Champion; Chrisa (introduction); Hitlo (introduction, villain, death); Horo (introduction, villain); Camilla (in a bikini for first time)
Synopsis
Camilla is kidnapped by the Carthonians and Sir Champion quickly constructs a fleet to rescue her. In the course of the rescue, the deposed Carthonian king, Chrisa, is restored to his throne.
Keywords
bondage; Cartho (kingdom); caves; rowboats

Another possibility for pencils credit is Jim Mooney.

First Line of Dialogue or Text
Her phenomenal sight enables her to see a terrifying condition.
Genre
jungle
Characters
Angel Eyes (introduction, villain, death); Fantomah
Synopsis
A mad scientist creates "flaming claws" with which he attacks the jungle people and animals. Fantomah turns the claws against the scientist, who dies of fright.
Reprints
Keywords
laboratories

First Line of Dialogue or Text
Mogah, a giant gorilla, wanders across the grasslands...
Genre
animal; jungle
Characters
Mogah (introduction, villain, a gorilla); Simba
Synopsis
Mogah the gorillas challenges Simba for the kingship of the jungle, only to be humiliated when a forest fire threatens all the jungle.
Keywords
forest fires