The Green Hornet (Table of Contents) 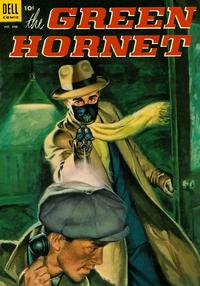 How To "Lift" a Fingerprint (Table of Contents: 1)

Genre
non-fiction
Synopsis
How to lift a fingerprint from an object with talcum powder and transparent tape.

Inside front cover; black and white. Illustrations with typeset text.

The Freightyard Robberies (Table of Contents: 2)

The Green Hornet's last appearance was in GREEN HORNET, RACKET BUSTER (Harvey, 1949 series) #47 (September 1949). Pencils and inks credits for this sequence from Alberto Becattini (May 14, 2007)

Proof of Treason (Table of Contents: 3)

Genre
detective-mystery
Characters
Green Hornet [Britt Reid]; Kato; Michael Axford
Synopsis
A university professor has an attempt on his life when a hand grenade is thrown at his apartment. The professor, who at one time was a member of the Communist Party, holds information on a mayoral candidate who is secretly a member of the party and was involved in espionage.

Story continues on the inside back cover in black and white and concludes on the back cover in color. The Green Hornet's next appearance would be in GREEN HORNET (Gold Key, 1967 series) #1. Pencils and inks credits for this sequence from Alberto Becattini (May 14, 2007)