The Sword of Zorro (Table of Contents) 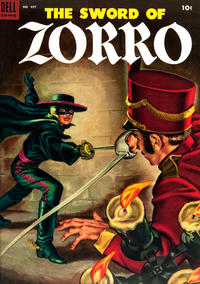 Lunge and Parry (Table of Contents: 1)

Genre
non-fiction
Synopsis
Description of the basics of dueling with the rapier and detailed information on the two fencing moves: the lunge and the parry.
Reprints

Inside front cover; black and white. Two illustrations with typeset text. Pencils and inks credits for this sequence from Alberto Becattini (May 14, 2007).

The Sword of Zorro (Table of Contents: 2)

Zorro carves his "Z" with his sword on the foreheads of those who deserve it.