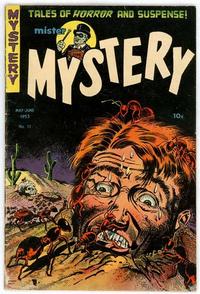 Beauty and the Beast! (Table of Contents: 1)

Genre
horror-suspense
Synopsis
Dress designer Van Shnapier is ugly beyond description. He builds himself a robot woman to model his designs. Mabel obeys his every wish, but in a fit of fury Shnapier hits her - thus damaging the model and making her run berserk.

"o.t. ""Robot Woman""; CAP from WEIRD MYSTERIES #2"
Story has been heavily reworked, panels rearranged and other artwork has been added.

The Marriage of Life and Death! (Table of Contents: 2)

Genre
horror-suspense
Synopsis
Young couple Nick and Dora are in love. Nick hopes to lift a family curse by marrying Dora, for he committed a heinous crime in a former life. But something goes wrong at the wedding.

Genre
crime
Synopsis
A man visits a contract killer to plan the murder of his unfaithful wife. The killer, however, has made a contract with the wife first.

Genre
satire-parody; science fiction
Synopsis
Inventor Larry ecapes into the cave men past from his nagging wife. There he mates with a cave girl and is confronted with more nagging.

Review of issue #9 by "Bobby Stewart". Could this be fanzine publisher Bhob Stewart?

The Little Monster (Table of Contents: 6)