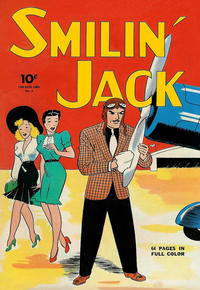 First Line of Dialogue or Text
I'm in love - I met the dashingest aviator today
Genre
adventure; aviation
Characters
Smilin' Jack; Jill Martin; Dixie Lee; Cotton Lee; Baron Bloodsoe; Slitz; Teekeela
Synopsis
Cotton Lee wrecks Jack's plane and Jack gets his pilot's license revoked. Jack's sister has a crush on Cotton and Jack needs to find a way to get her away to private school. When the sultry Teekeela offers him a job in Mexico flying gold, it seems like an answer to his problems. When he gets to Mexico he learns the true nature of the cargo he is flying.
Reprints

Story starts on the inside front cover in black, red, and white.

First Line of Dialogue or Text
Well, Jack--You may know too much--but...
Genre
adventure; aviation
Characters
Smilin' Jack [Jack Martin]; Jill Martin; Dixie Lee; Cotton Lee; Baron Bloodsoe; Slitz; Teekeela; Old Man Mose
Synopsis
Jack refuses to smuggle munitions for Baron Bloodsoe. The Baron decides to have Jack pushed out of a plane without a parachute. However, when the henchman Slitz pushes Jack out the door, Jack grabs him and they both glide down on Slitz's parachute. Jack makes his way back to the States where he finds an old man who can clear Jack of the charges that cost him his pilot's license. Jack gets a job with the border patrol. Meanwhile the Baron has plans to hijack a $200,000 stratosphere airliner in order to smuggle aliens into the United States.
Reprints

First Line of Dialogue or Text
The oxygen supply is great in this sealed cabin
Genre
adventure; aviation
Characters
Smilin' Jack; Dixie Lee; Baron Bloodsoe; Slitz; Teekeela
Synopsis
The Baron and Teekeela use a deadly gas to kill everyone on a stratosphere airliner--except for Dixie, who he is smitten with. Jack searches for the Baron's hideout with the border patrol. Dixie finds a way to take photographs of the cockpit instruments when the Baron goes on his next smuggling trip and the camera is found. The photos give the patrol a clue where the Baron's hideout is. The patrol finds the hideout, but the Baron takes off in the airliner and drops a bomb on his hideout, trapping Dixie inside.
Reprints

First Line of Dialogue or Text
Cotton, won't you please try to find a job
Genre
adventure; aviation
Characters
Smilin' Jack; Jill Martin; Dixie Lee; Cotton Lee; Baron Bloodsoe; Slitz; Teekeela
Synopsis
Dixie comes home to find that Cotton, who had eloped with Jack's sister Jill, has left her. Lured by promises of easy money, Cotton gets a job as a pilot for the Baron. When the Baron's plane is spotted by the border patrol, the human "cargo" is dumped to remove any evidence. Jack uses a special pressure suit to fly high enough to intercept the airliner. He strafes the airline with a machine gun, setting the engines on fire.
Reprints

First Line of Dialogue or Text
Slitz! A motor's on fire! Get out the parachutes...
Genre
adventure; aviation
Characters
Smilin' Jack; Jill Martin; Dixie Lee; Cotton Lee; Baron Bloodsoe; Slitz; Teekeela
Synopsis
Cotton is deserted by the smugglers, but he manages to ride the plane down and survive. Jack lands in his plane, but Cotton tricks him and steals his plane and returns to the gang's hideout. Jack eventually tracks him to the hideout and gets the drop on the gang. Cotton tries to escape and in chasing him Jack accidentally shoots him.
Reprints

First Line of Dialogue or Text
How can I ever face Dixie and Jill again!!
Genre
adventure; drama; aviation
Characters
Smilin' Jack; Jill Martin; Dixie Lee; Baron Bloodsoe; Slitz; Teekeela; Rufus; Dr. Gordon Medic
Synopsis
Jack returns with the smugglers, but is spurned by Dixie and Jill when they learn he was the one who killed Cotton. He tries to get the scar on his face fixed, but the doctor is in love with Dixie, and finds out on the operating table that Jack wants to get Dixie back.
Reprints

First Line of Dialogue or Text
Oh, Dixie---You've made me the happiest person...
Genre
drama; aviation
Characters
Smilin' Jack; Dixie Lee; Dr. Gordon Medic; Rufus
Synopsis
While recuperating from the surgery, Jack finds out that Dr. Medic is madly in love with Dixie. Later Dixie tells Jack that she's going to marry the doctor. Trying to forget her, Jack accepts a job as a test pilot for the X-13. Later, Jack is best man at Dr. Medic's and Dixie's wedding.
Reprints

First Line of Dialogue or Text
Oh, Happy---What's wrong? Jack's plane is in a crazy dive!
Genre
adventure; aviation
Characters
Smilin' Jack; Gale Gibson; Happy Hill; Bunny Wing; Gull Wing
Synopsis
Jack recovers from blacking out in the test flight and pulls out of the power dive safely. Jack is going to do one more test flight, but that night saboteurs rig a bomb into the plane. Both Gale and Bunny try to get Jack to give the flight to another pilot, but he refuses. Jack is abducted and Happy Hill is given the flight. The bomb goes off, but Hill manages to get free of the wreckage. He parachutes down, but hits hard and is badly injured. Jack tries to figure out who the saboteur is.
Reprints