The Ghost Mine (Table of Contents) 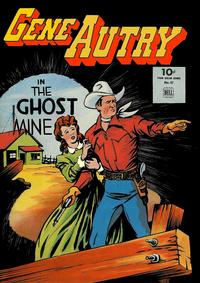 The Ghost Mine (Table of Contents: 1)

Inside front cover; black, red, and white. Text and illustrations.

The Ghost Mine (Table of Contents: 2)

Genre
western-frontier
Characters
Gene Autry; Champion (horse); Ike Harris; Bull Riggs; Biff; Milly Nolan; Curly; Bill Drake
Synopsis
Bill Drake has restarted the Ghost Canyon gold mine. He claims he bought it from Hank Nolan before he died, but Nolan's daughter Milly says he left the mine to her. Gene goes with Milly to the mine, where it turns out that the gold being shipped has all been stolen and melted down into new ingots.

The Bandit of Dust Devil Gap (Table of Contents: 5)