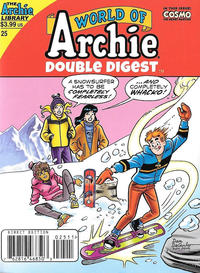 The Patient Patient (Table of Contents: 4)

A Lot to Learn (Table of Contents: 5)

Rock N' Roll Is Here To See (Table of Contents: 6)

Genre
humor; science fiction
Characters
Cosmo; Orbi; Moonlings; Gillywump; Professor Thimk; Astra; Jojo
Synopsis
Professor Thimk and Astra arrive on the moon to rescue Cosmo and Orbi. Because they are so close to Venus, the Martian Space Commission demands that they go and investigate it.
Reprints

Genre
humor; science fiction
Characters
Cosmo; Orbi; Astra; Professor Thimk; Moonlings; Gillywump; Venusian Monsters
Synopsis
A Venusian Monster helps Astra out of the crevice, and Orbi tells the crew that a short circuit in his helmet has caused the monsters to become afraid of him. The story ends with the monsters taking the crew to meet the queen.
Reprints

Genre
humor; teen
Characters
Archie Andrews; Fred Andrews; Veronica Lodge; Mrs. Andrews
Synopsis
When Archie is late for his date with Veronica because he has to clean his room, Veronica comes over and messes it up again.
Reprints

In the original printing in Archie #343, the script is credited to Rich Margopoulos.

Nerves of Steel (Table of Contents: 17)

Genre
humor; teen
Characters
Archie Andrews; Jughead Jones; Betty Cooper
Synopsis
Archie watches a horror movie over and over so that he will not be so frightened by it.
Reprints

This story is credited to Margopoulos and Amendola, but original art has been found crediting Gladir and Colan.

Genre
humor; teen
Characters
Betty Cooper; Archie Andrews; Hal Cooper; Alice Cooper; Midge Klump; Reggie Mantle; Dilton Doiley; Moose Mason
Synopsis
Forced inside due to a rainy day, Archie, Betty and her parents decide to play the board game "Be A Billionaire" (a take-off on Monopoly). During the game, Archie fantasizes about being a billionaire.
Reprints

Genre
humor; teen
Characters
Betty Cooper; Veronica Lodge; George; Smithers; Ample Ambrose
Synopsis
Betty puts an ad for Archie in the personals column of the local paper. When Veronica sees it, she puts in a bigger one.
Reprints

The Debbie Dancers (Table of Contents: 23)

Genre
humor; teen
Characters
Jughead Jones; Mrs. Jones; Archie Andrews; Mrs. Andrews; Veronica Lodge; Mr. Jones; Jellybean Jones
Synopsis
Jughead prepares a large meal for his friends, but when all of his friends have to cancel, Jughead has all the food to himself.
Reprints

Bugging the Bee! (Table of Contents: 26)

First Line of Dialogue or Text
My husband says we'll take it!
Genre
humor; horror-suspense
Synopsis
Introduction to the Tales Calculated To Drive You Bats section. Features a cropped version of the cover to issue 1, with the text above "Bats" rewritten.
Reprints

Genre
humor; horror-suspense
Characters
Igor; Freddie; Dracula; Superguy
Synopsis
To debunk the rumors that Igor and Freddie read comic books all day, they give us a look at their Monster Mondays, where they give advice to monsters.
Reprints

Genre
humor
Characters
Boris; E.J.; Freddie
Synopsis
Movie monster Boris fights with his producers to make a movie where he wins a pretty girl, rather than scare everyone or date another monster.
Reprints