On sale date as given in the copyright application as listed in the Catalog of Copyright Entries, Periodicals, January-June 1953, page 42, registration number B399038. 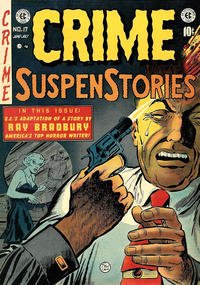 Genre
crime
Characters
Arthur Huxley (death); William Acton (villain)
Synopsis
Acton had killed Arthur Huxley and now tried to remove any clue that he had been at Huxley's home and had committed the crime. But his fixation with eliminating evidence of his presence had its consequences.
Reprints

Adapted from the short story "Touch and Go" (later retitled "The Fruit at the bottom of the Bowl") by Ray Bradbury.

Some of the story appears in flashback.

Genre
crime
Characters
Ronald Shelby (death); Anita Shelby (Ronald's wife, death); Harriet Walker (villain);Eric Walker (villain, Harriet's husband)
Synopsis
When Ronald tells his wife that he has bled his business dry and there is no more money, his wife tells him that she only cared for him because of money, and announces she's leaving him. He commits suicide, and Anita then returns to her old stomping grounds where she had found Ronald and hopes that lightning strikes again. Meanwhile, she joins an elderly woman having lunch and talks with her, then is surprised that the woman offers her to be her paid live-in companion. Arriving at the house, she confronts Harriet's husband Eric, once jilted by another woman, who craves women to get revenge on.
Reprints

Script credit from "Tales of Terror! - The EC Companion" by Fred von Bernewitz and Grant Geissman.

Genre
crime
Characters
Henderson (Markel's partner, death); Markel (villain, imminent death)
Synopsis
While traveling by car, Markel spots his partner asleep and kills him with a wrench. Locating a spot to discard the bloody instrument, he hurls it out the window, then locates a likely spot to engineer a crash with a semi truck so that the Police would not suspect the reality of his partner's head wound. Unfortunately, he discovers his car is traveling too fast to stop as planned......then as he approaches the rear of the truck, he spots a signed which said: DANGER! NITROGLYCERIN!!!
Reprints

Genre
crime
Characters
Roy Willis (hired hand); Amy Ryan; Patricia Gibson (villain, Circle-Diamond owner)
Synopsis
As the owner of a cattle ranch, Patricia is getting lonely and longs for a man. That man is Roy Willis, a ranch hand who talks her into making him foreman. But soon he bores of Pat and seeks adventure in town with another woman. But Pat discovers the pair and decides to give Roy something to remember her by!
Reprints
Keywords
Circle-Diamond Ranch

Script credit from "Tales of Terror! - The EC Companion" by Fred von Bernewitz and Grant Geissman.

The final panel by Kamen is a tie-in to "One for the Money...", the first story in this issue.

Script credit from The Fantagraphics EC Artists' Library (2012 series) #[18] - The Million Year Picnic and Other Stories.