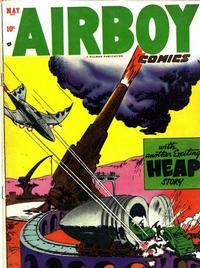 [The Cannon of Zomboli] (Table of Contents: 1)

McCann has other stories in Airboy Comics, and several Classics Illustrated. He is very easy to spot by his long noses and small chins, much black inking, old halfdead faces and very little action.

Maloo and the Kicker (Table of Contents: 5)

Chains of Khydoo (Table of Contents: 6)

[The Cave of the Banshee] (Table of Contents: 7)

Genre
horror-suspense
Characters
The Heap [Baron Eric von Emmelman]; Moira Shea; Tim O'Connor (Moira's boy friend); Killarney King (white stallion); Moira's un-named Uncle; The Countess (villain, introduction, death); Carney (villain, introduction, death); Satan (villain, black stallion)
Synopsis
Beggar girl Moira, victim of her Uncle's spending of her fortune on bad race horses, is informed she does own a beautiful white stallion that she could race and win money on. She must face the challenge of the evil Countess and her stallion Satan, however, who will use any trick to win.....that is, until the Heap intervenes.
Reprints
Keywords
Invess Village; the Cave of the Banshee