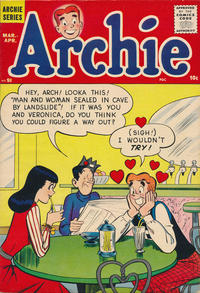 Cops and Robbers! (Table of Contents: 1)

In an oddly violent moment for an Archie story, detectives fire a machine gun at Reggie's house.

The name Elvis Boone is a combination of Elvis Presley and Pat Boone.

A Vicious Cycle (Table of Contents: 7)

Statement of Ownership for October 1, 1957. No circulation figures given.

Genre
humor; children
Characters
Pat the Brat
Synopsis
After taking a bath, Pat can't figure out where all the dirt in the bathtub came from.
Keywords
bath; bathtub