Later redrawn for the cover of Archie... Archie Andrews Where Are You? Comics Digest Magazine #1 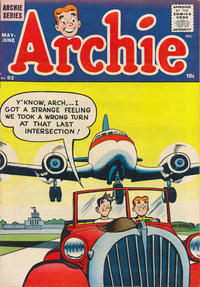 Stop the Presses (Table of Contents: 1)

Genre
humor; teen
Characters
Archie Andrews; Veronica Lodge; Pop Tate
Synopsis
Veronica is on a diet and is walking to lose weight. Archie is forced to walk with her, and hours later tries to convince her to have a soda at Pops. She weighs herself on a vending weight and fortune machine, but changes her mind about the soda when she reads the fortune.
Keywords
diet; sodas; walking; weight and fortune machine

Genre
humor; teen
Characters
Archie Andrews; Reggie Mantle; Betty Cooper; Veronica Lodge
Synopsis
Archie learns that Veronica is sick and races to her side, barreling into Betty in the process. Betty and Reggie decide to get back at the two lovebirds by putting onion juice in Veronica's vaporizer, which causes both Veronica and Archie to bawl uncontrollably.
Reprints
Keywords
crying; food blender; hamburgers; onions; vaporizer

credits taken from the reprint