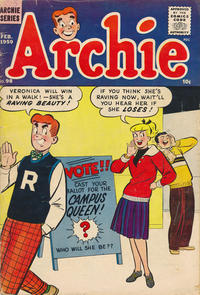 A Month's Allowance Saves the Day! (Table of Contents: 4) (Expand) /

Genre
humor; teen
Characters
Archie Andrews; Jughead Jones; Reggie Mantle; Alice Fleeble; Veronica Lodge
Synopsis
Archie brags to Jughead and Reggie that he can get any girl to date him. Jughead randomly picks a name out of the phone book for a girl for Archie to date. Archie then goes to woo the young lady.
Reprints
Keywords
conceit; cousin; flattery; phone book; survey; telephone