Based on the story "The Interpreter." 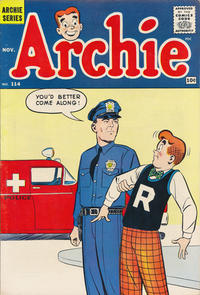 The Brush Off! (Table of Contents: 4)

Genre
humor; teen
Characters
Archie Andrews; Reggie Mantle
Synopsis
Archie tells Reggie that Betty is mad at him. Reggie says no girl can resist his charms, but gets a shock when he gets to Betty's house.
Reprints

Genre
humor; teen
Characters
Archie Andrews; Reggie Mantle; Betty Cooper; Veronica Lodge; Pop Tate
Synopsis
Archie and Reggie spend the day displaying an incredible ability to throw things to each other without ever breaking them. Until the girls ask them to wash the dishes, and then they drop them all.
Keywords
dishes; half dollar; newspaper; spoon; straw

The Interpreter (Table of Contents: 7)

Genre
drama; humor; teen
Characters
Archie Andrews; Betty Cooper
Synopsis
Though Archie is one of the best students in Spanish class, he thinks learning a foreign language is a waste of time. Until a boy is hit by a car and only Archie can talk to the boy's Spanish-speaking father to find out his blood type.
Reprints
Keywords
ambulance; blood type; hospital; interpreter; Spanish

This story was later remade with the same script but new art (also by Lucey) and was remade at least once more with a revised script.

The Unwelcome (Table of Contents: 10)