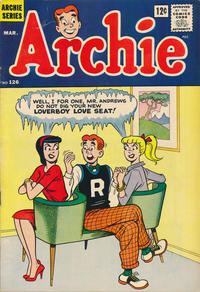 No Smoking (Table of Contents: 2)

Genre
humor; children
Characters
Shrimpy; Daphne
Synopsis
After hearing his friend read about a dragon in a story, Shrimpy wonders if it was old enough to smoke.
Keywords
dragon; reading; smoking

The End (Table of Contents: 3)

Speed to Spare (Table of Contents: 4)

It Ghost To Show You (Table of Contents: 7)

Genre
humor; teen
Characters
Archie Andrews; Jughead Jones; Betty Cooper; Veronica Lodge
Synopsis
The gang inspects a haunted house, and they all assume that the ghosts are just tricks the others rigged up to scare them.
Keywords
ghosts; haunted house

This story, which has Archie gaining a special power from nuclear radiation, appeared several months before the debut of Spider-Man.