Later redrawn for the cover of Archie... Archie Andrews Where Are You? Comics Digest Magazine #8. 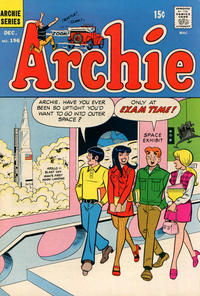 Scent of Success (Table of Contents: 1)

First Line of Dialogue or Text
I've heard she can do it, Arch, but I don't believe it!...I just don't believe it!
Genre
humor; teen
Characters
Archie Andrews; Dilton Doiley; Cricket O'Dell; Hiram Lodge
Synopsis
Archie discovers that Cricket O'Dell doesn't only have the power to smell money, but to trace the scent of anyone who is rich. He asks Cricket to lead him to Veronica, over the objections of Dilton, who wants to make a scientific study of Cricket's powers instead of using them for cheap romantic gain.
Reprints

First Line of Dialogue or Text
Dear Archie, I think your show is just groovy.

The Image (Table of Contents: 3)

First Line of Dialogue or Text
I just don't understand you, Veronica Lodge! How can you go out with a klutz like that?
Genre
humor; teen
Characters
Archie Andrews; Veronica Lodge; Reggie Mantle
Synopsis
Fearing that Reggie will spread the rumor that he's a "klutz," Archie tries to improve his relationship with Reggie, but his attempts to make amends just cause Reggie serious pain.
Reprints

The Magic Garden (Table of Contents: 6)

As in most stories drawn by Lucey, the name plate on the Lodge estate reads "J.P. Lodge." He was not officially re-named "Hiram" until several years later.