Editing credits from Statement of Ownership. 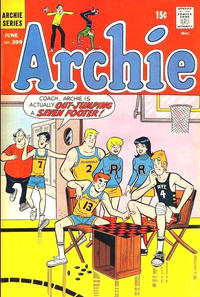 A Stream of Thought (Table of Contents: 4)

First Line of Dialogue or Text
Daddy! Tell me again -- how you went fishing in Crystal Stream when you were a little boy?
Genre
humor; children
Characters
Hap Holliday; Li'l Jinx
Synopsis
Li'l Jinx witnesses all the horrible pollution in her town's water.

One of a number of environmentally-conscious stories Archie published around this time.

It's a Grand Old Name (Table of Contents: 6)

In this story, as in many around this time, The Archies consist of Archie, Reggie, and Jughead -- Betty and Veronica are not members, though they were shown as members on the records and in the animated cartoons.

Jack of All Trades (Table of Contents: 8)

Includes promotional blurb for Archie Series comic books on the bottom of the first page.

First Line of Dialogue or Text
Dear Archie, I always watched The Archie Comedy Hour and I thought it was the greatest.
Feature Logo

Rough and Ready (Table of Contents: 15)

First Line of Dialogue or Text
You're coming along fine, Archie!... How are the hands?
Feature Logo