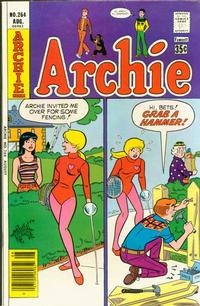 First Line of Dialogue or Text
Good grief! Has your dog had more puppies?
Feature Logo

These are reprints of two late-sixties era Archie syndicated newspaper strips. They were also produced prior to the introduction of Hot Dog as Jughead's dog.

Fill in the missing letters based on the provided code.

Minding a Star (Table of Contents: 8)

When reprinted in Archie Double Digest (Archie, 2011 series) #240, the writer is credited as Frank Doyle and the pencils are credited to Dan DeCarlo.

First Line of Dialogue or Text
Where would you like your dinner, Mr. Andrews?
Feature Logo