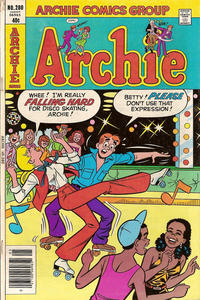 Genre
humor; teen
Characters
Archie Andrews; Veronica Lodge; Waldo Weatherbee; Adam the Alien
Synopsis
Archie and Veronica meet Adam, an alien who was orphaned at an early age and is searching the universe to find his home planet.
Reprints

Adam, a character based on the late '70s interest in science fiction (as well as the hit TV mini-series "Roots"), appeared in two other Archie titles in May 1979: Jughead #288 and Betty and Veronica #281. Reader interest in the character must have been less than expected: the ending promises that he will be going to Riverdale High School, but this was never followed up, and Adam was quietly dropped.

Root of All Evil (Table of Contents: 5)

Genre
teen; humor
Characters
Archie Andrews; Veronica Lodge; Jughead Jones
Synopsis
After Veronica tells him to get a job, Archie goes to work for an escort service, which trains him to be irresistible to women.
Reprints

Josie Has the Answer (Table of Contents: 7) (Expand) /

Raring to Go (Table of Contents: 9)