[The Legend Horror] (Table of Contents) 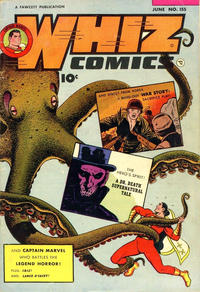 Dogs and Frogs (Table of Contents: 1)

First page starts on inside front cover and concludes with last page on inside back cover.

The Hero's Spirit! (Table of Contents: 3)

A Chesty Retort! (Table of Contents: 4)

A Fitting Answer! (Table of Contents: 5)

The Guardians of the Tomb (Table of Contents: 7)

A Highland Sandwich (Table of Contents: 9)

Originally credited to George Tuska. Saltarella states "this is Pete Morisi, whose faces resemble Tuska's but his figures don't. His
inking is coarser than Tuska's as well."

Table of Contents
This issue was most recently modified by:
Issues in this series have been indexed by:
< Previous Issue |
If you believe any of this data to be incorrect, please let us know.
Cover thumbnails are used for identification purposes only. All rights to cover images reserved by the respective copyright holders.