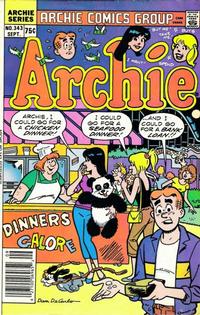 Inside front cover. Anti-smoking message by Archie Comics and the American Cancer Society

Genre
humor; teen
Characters
Archie Andrews; Fred Andrews; Veronica Lodge
Synopsis
Archie's father tells him to clean up his room before he can go on his date with Veronica. He results to the old trick of filling his closet to the bursting point, but then gets distracted by old photos and a video game.
Reprints
Keywords
closet; guitar; photographs; video games

Archie has a box of comic books in his room. In the reprint in World of Archie Double Digest #25, the script is mis-credited to George Gladir.

Subscribe and Get One Issue Free! (Table of Contents: 7) (Expand) /

Everyone into the Pool!! (Table of Contents: 8)

Letters credit from reprint in World of Archie Double Digest #40 reprint. The reprint mis-credits the story to Frank Doyle, pencils to Dan DeCarlo, and inks to Rudy Lapick.

Hold the Phone (Table of Contents: 12)

Genre
humor; teen
Characters
Archie Andrews; Jughead Jones; Veronica Lodge
Synopsis
Archie has a fake phone installed in his car so he improve his status. He has trouble when Veronica hitches a ride and expects the phone to work.
Reprints
Keywords
car phone

Lettering credit from the reprint in Archie Double Digest #241. In that reprint the script is mis-credited to Frank Doyle.