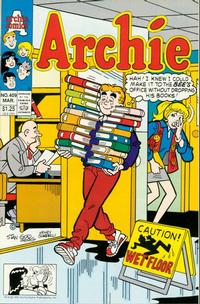 Just Yolking Around (Table of Contents: 2)

Genre
humor; teen
Characters
Archie Andrews; Fred Andrews; Mary Andrews
Synopsis
Archie goes to the market to get some eggs. He avoids breaking the eggs despite a number of chances for an accident along the way and back.
Reprints
Keywords
bicycle; eggs; ice; supermarket

Arctic explorer Admiral Peary's name is misspelled as Admiral Perry. Archie's response as Rhett Butler is paraphrased as "Frankly my dear, I don't give a darn!"

The Big Touch (Table of Contents: 8)

The Peace Negotiator (Table of Contents: 11)