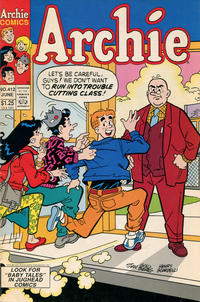 When reprinted in Jughead and Archie Double Digest (Archie, 2014 series) #27, writing is credited to George Gladir and inks are credited to Mike Esposito.

On the Lookout (Table of Contents: 2)

Genre
humor; teen
Characters
Archie Andrews; Jughead Jones
Synopsis
One evening Archie has just bought a slice of pizza, and is sneaking around the neighborhood. As he finally gets ready to take his first bite, Jughead appears, snatches it and runs off. The only dialogue is Archie saying "Darn!" in the last panel.
Reprints

This story appears between parts 1 and 2 of Riverdale Ditch Day.